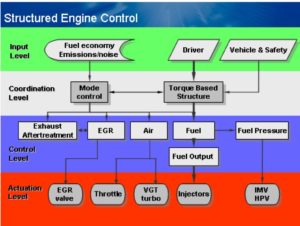 Summary: Complex embedded software such as that associated with engine management systems require coherent inputs from the engine and for the vehicle to be tested consistently. Hardware in the loop is a common technique used in the automotive industry to test the engine control unit (ECU) software.
An alternative tool has been developed at Delphi, called „SEC-in-the-loop“. It combines the Delphi Structured Engine Control (SEC) software, which contains around 200 subfunctions, with an engine and a vehicle model in order to simulate on a computer the whole system, from driver to vehicle, including the ECU software. Scripts are used to connect the C-code of the SEC functions as implemented in the ECU. This code is then compiled to be executed on a computer. The engine and vehicle models for a 1.6L diesel engine on a C-segment car are based on GT-suite. A co-simulation tool, xMOD, is used to connect and simulate together these components from heterogeneous environments. Test cycles can run offline in xMOD. Every ECU signal and engine parameter can be monitored. The complete chain is validated by comparing simulated signals and emissions to measured vehicle data. This co-simulation tool is used for ECU software validation and control algorithm development.
The tool is applied to predict the emissions behavior of a calibrated vehicle on the wide range of conditions present on Real Driving Emission (RDE) tests. Delphi has already developed a RDE demonstration vehicle. However, not all combinations can be tested on the vehicle. SEC-in-the-loop simulations are run with several ambient temperatures, pressures and driving profiles. Based on these results, worst case conditions for NOx emissions can be identified and then tested on a vehicle in an environmental wind tunnel. The final vehicle results confirm that the software and calibration can be RDE compliant, even under the most severe conditions.

26th Aachen Colloquium Automobile and Engine Technology 2017
1 Introduction
The growing complexity of automotive electronics led the industry to find alternative ways to develop, test and validate hardware and software. The first Engine Control Units (ECU) were based on 8-bit microcontrollers with a few kilobytes of memory. Nowadays, modern ECUs include multi-core microprocessors and megabytes of memory. Due to the increasing complexity of embedded software, the workload required to develop it has increased to a point where it is not efficient and cost competitive to only use real engines for testing.
Hardware-in-the-loop (HIL), is a well-known technique used in the automotive industry for many years in order to address this issue. The ECU is connected to a system which simulates the behavior of the real engine and vehicle. Unfortunately the setup of such an environment is usually relatively complex. Additionally, if only the software is tested, it is not necessary to connect a real ECU to the hardware.
Engineers who develop control or diagnostic strategies for ECUs are used to simulating parts of their algorithms in simulation environments such as Matlab Simulink. The simulations usually only focus on that small part of the algorithm being worked on. But many of the controls and diagnostic functions require closed loop operation using sensors installed on the engine. As there are many interconnections between the strategies, their behavior also depends on other software strategies working properly.
Therefore, in order to perform realistic simulations, the control and diagnostic strategies should all be combined and connected to an engine and vehicle model. Delphi has developed such an environment called SEC-in-the-loop.